Fake News articles share blatantly false information or grossly distort actual news reports. This has become a major problem in politics, media, and national security, even reaching a point where it destroys lifelong friendships. While Fake News has existed for years, it seems to become most prevalent in the months leading up to major elections.

Researchers at Singapore’s Nanyang Technological University examined the term “fake news” as it applies to the United States, Australia, China, and Italy between 2003 and 2017. In their 2017 paper published in Digital Journalism, they identified six unique types of fake news.

The problem isn’t just news articles and imagery. Software used to manipulate audio and video is on the rise as well [1]. While there are fewer fake news sources than verified new sources, 30% of all fake news is linked back to Facebook posts and shares, while only 8% of verified news links back to Facebook1. Social media expands the reach of fake news significantly.

There has been more new error propagated by the press in the last ten years than in a hundred years before 1798.

These are the words John Adams scribbled in the margins of his copy of Marquis de Condorcet’s Outlines of an Historical View of the Progress of the Human Mind. Condorcet believed that a press free from censorship would create an open debate of ideas where rationality and truth prevailed 2. While a press free from censorship has certainly created a more informed society, not everything you read or see is true.This was the case in 1798 and continues today.

In 2016, the FBI monitored social media on Election Day to track a disinformation campaign based in Russia. They found that Twitter and Facebook were the most popular hubs for fake new stories touting conspiracy theories and hoaxes. While it was confirmed that many fake news articles originated from Russia, they weren’t the only source 3. What’s alarming is the number of people who believed the fake news and shared false information without proper fact checking.

What’s the Purpose of Fake News?

The most obvious reason, given our current circumstances, might be to sway elections. While that’s certainly a possibility, studies haven’t proven or disproven this theory. But, there are a number of proven reasons Fake News exists.

News satire and parodies are comical. Every April Fool’s day, The Onion posts an article with a shocking headline. Pranksters then share the article to trick their friends and followers who open the article to see that the headline was in jest. Fake news made with blatant attempt at trickery or shock value can provide great entertainment value when done right.

By downplaying a situation, it eases mass hysteria. Governments or company owners can downplay situations that might otherwise cause panic. In some cases, this might prove beneficial for the general public, but in others it might result in a lack of preparedness. This tactic might also be used in elections to severely damage the reputation of a political party or candidate.

Some news stories lack significant information that ties the story together. For the purpose of flow and completeness, journalists might fill in the gaps with minor details that aren’t based on fact. This is often seen when photos of past events are used in stories about current events, like natural disasters, elections, and the Coronavirus pandemic. While the imagery certainly doesn’t indicate that the article’s text isn’t fact-based, it certainly raises some red flags.

Each time someone clicks on a fake news article, someone makes money. Advertisers pay each and every time someone sees their ad. Because of this, those behind fake news focus on writing about the most popular topics. Right now, Americans are focusing on the upcoming election. Before that, the hot topic was Coronavirus. With so much information already available, to churn an income and get those clicks, the headlines have to be attention-grabbing. This tactic is called clickbait.

During the 2016 United States Presidential Election, one such company reportedly generated up to $40,000/month using clickbait ads sharing outrageous and false claims about the presidential candidates4 and another admitted to generating upwards of $2,000/day using the same tactics5.

No matter your political affiliation or your view on the impact of fake news in the 2016 election, it’s important to make sure that your decisions aren’t based on fake news.

Spotting fake news can be tough at times. While some stories are blatantly false, some choose to twist the facts of actual stories to try and sound believable. It’s important to remember that stories containing opinions that you disagree with aren’t necessarily “fake” provided they don’t present opinions as factual. Our focus here is on stories designed to provide information intended to deceive their readers. Here are some tips you can use to spot fake news.

Many times, the source of the information can be very telling. For example, an account that hasn’t been around very long isn’t likely to be a source of factual information. You might even notice a trend in the types of information shared or posts indicating a blatant attempt at fooling readers.

Make Sure You’re Not Dealing with a Fake

Producers of fake news often imitate legitimate news outlets. They do this using lookalike websites and social media profiles. Always check the URL to ensure it matches that of the official website. Many fakes use a URL that is so similar to that of the real website that it can be tough to distinguish between the two.

Look for the Verified Check Mark

Profiles on Twitter appearing to belong to well-known officials or companies, but lacking Twitter’s verified check mark should never be trusted.

For example, the account behind this tweet uses the official CNN logo and it’s username is @CNN_Politics. It was created to imitate a legitimate and trusted source, but instead, presents extremely lopsided exit poll numbers for the state of Florida. 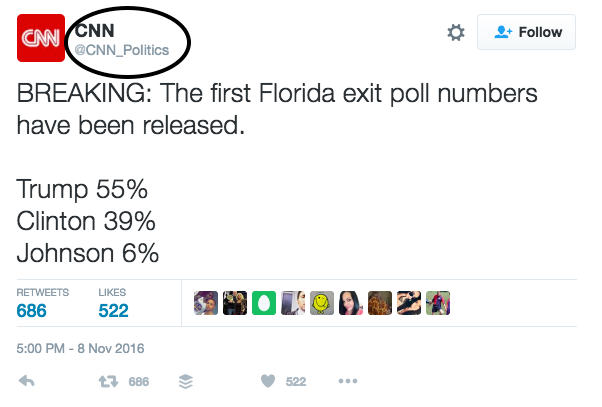 Read Beyond the Headline

Journalists want to get clicks on their articles. Because of that, their headlines may be outrageous in their claims, only to simmer down the claims within the body of the article. Before trusting claims you read in an article’s headlines, make sure to read the full article. What is the whole story?

Is the author a credible source? Do they have a history of spreading misinformation or outrageous claims? Have they posted articles in the past or is this the first they’ve been seen posting articles online?

Do Your Part to Stop Fake News

Think before you share. Fake news is a real problem and social media only makes it worse. It’s important to be informed and it’s important that the information you share is factual.

One of many features Guardio provides is blocking of fake news websites. Many providers of fake news create lookalike websites that imitate real news outlets. Even their URLs make them tough to distinguish from the real thing. When you click on an article that turns out to be on a malicious fake website, Guardio blocks it so you don’t have to worry about fact checking the article or accidentally sharing false information.